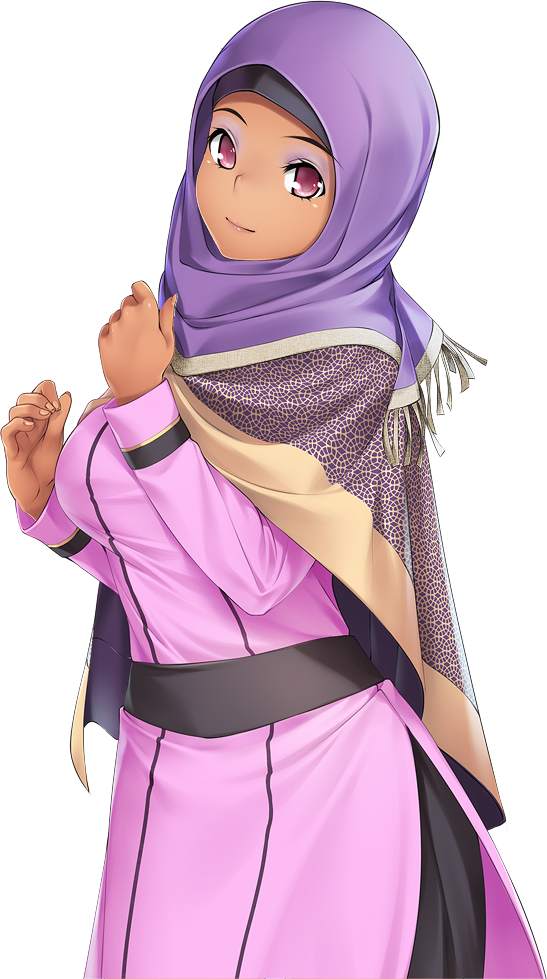 Abia is a curvy girl with a tan complexion. Her hair color is black and her eyes are a soft shade of pink. Her makeup consists of light lilac eyeshadow.

In her regular outfit, Abia wears a pink abaya (cloak) with black detailing that has a peekaboo slit revealing a black skirt underneath. She also wears a two scarf styledhijab (headscarf) with a black hijab cap underneath. Her top scarf is mauve with a gold trim and fringe while the secondary scarf has a dark purple and gold pattern with gold trim.

“Meet Abia. Abia was born to strictly religious parents and though her family expects her to behave in a traditionally conservative manner. I think you’ll find she has slightly different plans in mind.“- Description by HuniePot Dev on the Sept. 2017 Update.

Abia is a sex addict, to the point that it interferes with her life. She constantly makes references to sex and often misspeaks with sexual terms that sound similar to what she actually meant, though she tries to explain them away as simple mistakes. She apparently got in trouble with airport security for doing too many full-body searches. Abia is, however, a kind and humble person who does not want to be a burden on anyone, and while she is not ashamed of herself, she understands her horniness causes problems for herself and others. She has a very slight Middle Eastern accent and is soft-spoken, but often speaks quickly and nervously.

Baggage is a feature exclusive to HuniePop 2 that equips all 12 dateable girls with a set of three unique traits that are unlocked during conversation and pose additional challenge during dates.

All of the 12 dateable girls have two sets of four unique gifts each, in charge of increasing the player’s Passion and Style LVL. Abia’s unique gift type is Kinky and her shoe type is Flats.

Abia is Candace’s best customer. Abia is so enamored by her performances that she ends up spending all of her paychecks on her. It’s become a problem, so she’s started avoiding the place. It is unknown if Candace actually sees Abia as her friend or only likes her because she gives her a lot of money.

Abia and Lola first become acquainted when Abia uses a full-body search as an excuse to grope Lola. Though Lola acts embarrassed from the incident, Abia seems satisfied.

Abia and Lillian bond over sexual curiosity (in Abia’s case) and hatred of parents (in Lillian’s case). Both girls want to/already do things that their parents would likely not approve of.

One thought on “Abia”